After a two years of big declines in occupancy, rates and optimism, the hotel industry seems to be roaring back to life.

>Just this week InterContinental Hotels Group (IHG), which includes giant brands like Holiday Inn and Crowne Plaza, reported that its occupancy was up 4 percent in the third quarter. It also announced big plans to move into the recovering Las Vegas market. (See below)

>Starwood’s CEO says that the chain’s occupancy rates are back now back at 2007 levels with rates in positive territory. (Westin, Sheraton and W Hotels fall under the Starwood umbrella.)

>Best Western reports that it sold 15 percent more room nights on its web site in September compared to the same time last year.

>Marriott’s feeling so confident about the future that this week it announced an ambitious plan to add 80,000 to 90,000 new rooms to its portfolio of brands over the next three years.

Frequent travelers will feel pricing pressure most in big gateway cities such as New York where third quarter rates were up 12 percent according to STRGlobal. In San Francisco, rates were up about 7 percent; in Boston, they were up 6 percent.

Are you paying significantly more for hotels than you have in recent years? Leave your examples or comments below.

Now for a few more newsy nuggets from the hotel scene:

EARNING AND BURNING ON THE STRIP. Priority Club Rewards members should be pleased to know that they now have 7000 plush rooms on the Las Vegas strip where they can earn or redeem their hard-earned loyalty points.

This week InterContinental Hotels Group (IHG) announced a new alliance with the Venetian and Palazzo that will, among other things, allow Priority Club members to book suites on the IHG web site, redeem a minimum of 40,000 points for a one-night stay, and earn points as if they were staying at any other IHG brand. (Stay tuned…this functionality is not yet available on its web site.) Until now, IHG had only a minor presence in Las Vegas with a handful of off-strip properties.

In a similar move, Marriott recently (and for the first time) announced that it too would make a splash on the strip by teaming up with the Cosmopolitan, which opens in the new City Center complex on December 15. Marriott Rewards members will have similar opportunities to earn and burn program points on the strip. 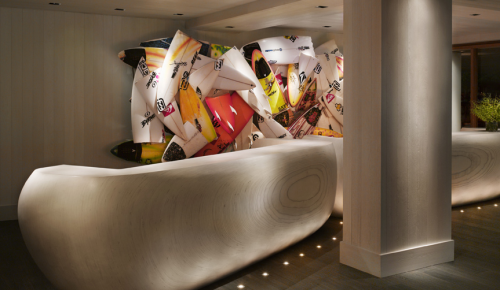 ALOHA MARRIOTT. Marriott introduced its new design-chic EDITION hotel in Honolulu earlier this month. (In the building that previously housed the Renaissance Ilikai Waikiki hotel near the Ala Moana Shopping Center.)

Marriott partnered with hotel design maven Ian Schrager to create the new EDITION brand, so guests can expect the highly stylized surroundings they may have experienced at Schrager’s other hotels that include the Delano in Miami, the Mondrian in LA, or the Gramercy Park or Royalton in NYC. This is the first EDITION hotel to open; Marriott says more will open in other “24-hour cities” over the next few years.

Pro: The Waikiki EDITION offers free high-speed internet access– unusual for an upscale hotel. Con: The hotel is located on Ala Moana Blvd across from a Marina and not on the beach– but from photos it does seem to have a super-sexy pool area.

Rates run in the $375 per night range, but can dip as low as $195 during promotional periods. Marriott Rewards members can redeem a minimum of 35,000 points for a one-night stay.

Don’t Forget! BOOK ALL YOUR ONLINE TRAVEL VIA LINKS FROM THE TICKET! It helps us help you!