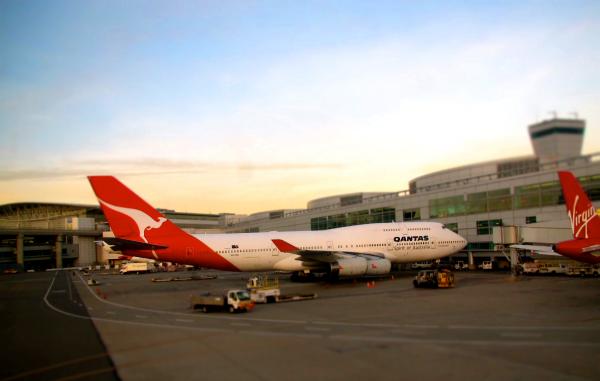 QANTAS will depart San Francisco International for Sydney for the last time tomorrow night, Saturday May 7. The flight departs at 11:10 pm.

QANTAS is moving the daily nonstop flight to Dallas/Ft Worth where it has close ties with Oneworld partner, American Airlines.

With QANTAS out of the SFO-SYD market, only United will offer nonstops on the route. One stop options from SFO include Air New Zealand via Auckland, or QANTAS via Los Angeles. I’m wondering if perhaps the newly named Virgin Australia may consider adding nonstops from Sydney to connect with SFO-based Virgin America. Stay tuned for more on that…

I’ll sure miss seeing that graceful kangaroo on the big red tail of the QANTAS 747 parked at SFO’s international terminal.

SFO officials are sad to see it go, too. “We are sorry to see them go and we would warmly welcome back QANTAS in the future,” said airport spokesperson Mike McCarron.

I’ve been unable to get QANTAS officials in Los Angeles to make any sort of statement about its departure. SFO says that no formal farewell is planned.

So I guess the big Aussie bird will go quietly into the night tomorrow. A sad sight indeed.

How do YOU feel about QANTAS’ departure? Please leave your comments below!