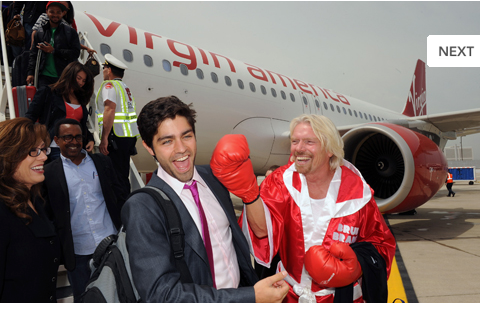 On Wednesday, Virgin America inaugurated nonstops between San Francisco International and Chicago-O’Hare (ORD) in typical fashion– by throwing a big, glam party on a Chicago hotel rooftop full of stars (like Adrian Grenier) and swashbucklers (like Richard Branson).

On Wednesday, Virgin America inaugurated nonstops between San Francisco International and Chicago-O’Hare (ORD) in typical fashion– by throwing a big, glam party on a Chicago hotel rooftop full of stars (like Adrian Grenier) and swashbucklers (like Richard Branson).

Fans of Virgin have long awaited flights to the Windy City, but the carrier’s attempts to enter the SFO-ORD market were stymied due to lack of gate space and the power of entrenched legacy carriers American and United Airlines.

However, recent gate swapping among consolidating airlines plus a full-on charm offensive on the Chicago political machine finally landed Virgin with rights to fly from both Los Angeles and San Francisco into O’Hare.

(Please sign up for more frequent updates from TravelSkills!)

This is great news for Bay Area travelers who fly regularly on this very busy route. Entry by a new low-cost carrier means that fares will remain in check and hopefully decline. Virgin offered a few $200 round trip fares to kick off the service, but looking out over the summer months, you’ll pay $300-$400 or so to get to and from Chicago on any carrier. If that seems painful, I’m certain it would be a lot worse if Virgin were not in the market. With all these flights plus Southwest’s service into Chicago Midway airport, I can smell a fare war brewing…but it won’t happen until demand starts to wane in the fall months.

Members of frequent flyer programs are already benefiting from a slew of new promos to attract and/or keep them from shifting. American AAdvantage and United Mileage Plus jumped in with their biggest marketing guns: double elite qualifying miles for flights through the end of August. With that, Virgin’s Elevate countered with a triple points promotion (that’s a cool 15 points per dollar spent. Not bad!) Too bad Virgin does not have an elite level for Elevate members yet…but execs tell me it’s in the works….stay tuned.

Residency in California or Illinois and registration is required for all the promos: Virgin America | United| American

Virgin America entered the SFO-ORD market with three flights per day. United responded to that by adding five new flights per day on the route, for a total of 17. American offers six flights per day. [UPDATED: Continental Airlines now offers a single daily round trip between SFO and ORD using a nice new B737-900]

“Virgin America is a very credible challenger to American and United on the SFO-ORD route. Our research shows that even among frequent business travelers, 40% do not consider themselves to be brand loyal to any travel company. Virgin has some key amenities which business travelers value and that United lacks– satellite TV, in-seat power, and Wi-Fi. Between United and American, I believe that United will retain more of its market share, since it operates hubs in both Chicago and San Francisco. With a large base of Mileage Plus members in both cities, United’s double miles bonus offer will resonate. Even with double AAdvantage miles, I believe American is apt to lose more market share, since SF is not one of its five key ‘cornerstone’ markets.”

Frequent travelers should keep in mind that Southwest Airlines flies nonstop to Chicago’s Midway Airport four times per day from Oakland, three times from SFO and once a day from San Jose. Southwest’s summer fares to Midway are also in the $300-$400 range.

What do YOU think? Next time you fly to Chicago, which airline would you choose…and why?