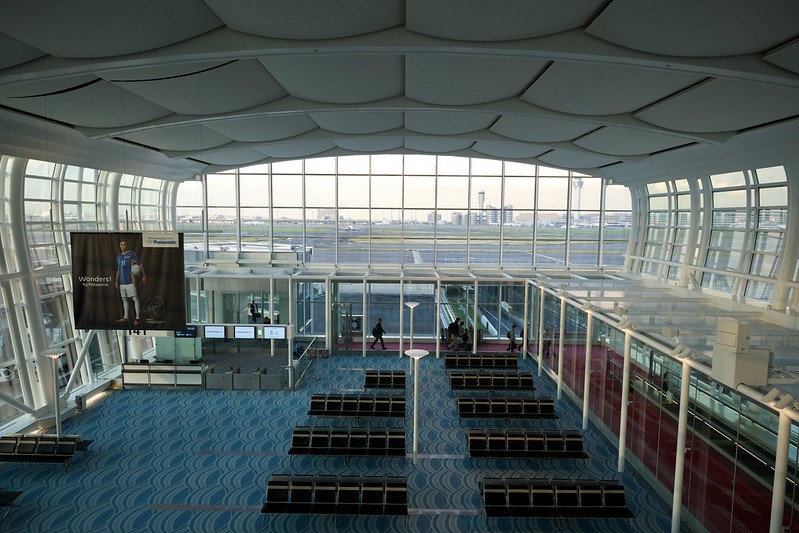 Quick — where is Tokyo International Airport? If you haven’t flown into Japan recently, your reflex response might be “Narita,” the airport located well over an hour east of the capital by train or even longer by taxi or shuttle bus.

However, closer-in Haneda (HND) is also known as Tokyo International Airport. This near-city-center airport is getting an increasing amount of attention with a newly expanded international terminal that turns four this month, and a handful of new flights.

For example, United launches a new daily nonstop from SFO to Haneda this Sunday October 26th, using a three-class 777-200ER. On December 1, Japan Airlines will deploy a larger, newly revamped, four-class Sky Suite 777 on the SFO>HND run. And American Airlines is fighting to get in on the Haneda action.

On the plus side of the scheduling for US flyers,  return flights from Haneda are a pleasing late night departure (ideal for connecting from elsewhere in Japan or Asia, since Haneda has far more domestic flights than Narita), and tend to arrive at west coast hubs in the late afternoon, in time for a 7-9pm connection– or dinner and bed.

Frequent Tokyo traveler and TravelSkills reader Hitoshi Hokamura told us, “I have been flying SFO-Narita for 23 years but after a one-time experience on a Haneda night flight, I have completely switched to HND for both my business and pleasure trips. Haneda is much closer to Tokyo, plus timing is great. For example, with Narita flights, my first day and last day of the trip used to be chopped in two on both ends, but with this night flight to/from Haneda, I have almost a full day on both ends .”

In addition the United’s and JAL flights from SFO, flyers from or connecting in North America also have the option of Haneda flights from:

So why aren’t we all flying to Haneda? Well, the authorities granting slots for Haneda have been slow to let non-Japanese carriers in — and when airlines like Delta and American have been granted slots, they’re forced to depart and arrive during inconvenient overnight hours. (Haneda is the second busiest airport in Asia and the fourth busiest in the world.)

That type of restriction on US carriers makes Haneda flights only effective for flights to and from the west coast. That’s why American cut its New York JFK-Haneda flight last October, and that’s why Delta shifted its Detroit-Haneda flight to Seattle.

More controversially, timing is also allegedly part of the reason why Delta’s flight is operating on what’s basically a seasonal basis. For its part, American doesn’t think Delta’s playing fair, and has asked the US DOT to hand over Delta’s slot for Los Angeles service — so we could see an American Airlines flight shifting from Narita to Haneda if the DOT agrees.

Haneda vs Narita: Which is best for you?

Choose Haneda for: Evening west coast US departures, evening US west coast arrivals/connections, late night Japan departures, if your destination is Tokyo, or if you’re connecting late in the day on a return from another city

Choose Narita for: More flight options, non stops from non-West-Coast cities, same-day connections to major Japanese cities, if you want to connect on a US airline elsewhere in Asia for upgrade or status reasons, wider choice of connections to Asia.

Good Advice for getting to or from Haneda:

Keikyu, the primary railway company for access from Haneda, is probably the best way to get to or from Haneda for most business travelers, and offers three options: $10 on a fast, clean train to Shinagawa station in 12 minutes for Y410 (knock off two zeroes to convert approximately to USD, so about $4) or Tokyo station in 20-30 minutes for Y580). Compare that with over $30 on the NEX train from Narita or $25 on the more complicated Keisei option.

Second, Keikyu and other companies offer limousine buses that are direct with no transfers, take about an hour and range from $10-25 depending on your destination. That’s less than half the time and about half the cost of Narita limousine buses.

Third, there’s a set-fare taxi option that will set you back the best part of $85, but is obviously door-to-door to or from your hotel. That’s less than a third the price of a taxi from Narita, which is in excess of $200.

And, lastly, there’s the Tokyo Monorail, which is a bit of an advanced user option that connects to four lines including Tokyo’s circular Yamanote Line. If you’re familiar with Tokyo and know how the Suica card system works (it’s a tap-the-card payment system that works across Tokyo and several other cities in Japan for everything from transport to vending machines), then this is probably the best option for you.