There’s an excellent article in the Cleveland Plain Dealer this week about how the United-Continental merger is coming along. The piece does a great job showing how the merger will touch customers– especially frequent travelers.

>For example, the red carpet that United customers are used to seeing at boarding gate for elite level members will be switched out for Continental’s blue. (“Red is not in our color wheel.”)

>Cocktails at Red Carpet Clubs will be complimentary as they are now at Continental Presidents Clubs.

>United’s famous “Rhapsody in Blue” will remain the boarding music on the merged carrier.

>As many of us already know (and are thankful for), United’s Economy Plus seating will be installed on the Continental fleet…but not until next year.

>Not included in the piece (since Cleveland is a Continental town) is that Continental’s flights at SFO have already moved from Terminal 1 to United’s Terminal 3.

United execs say that the melding of the two carriers is currently about half done.

Here’s the link to the full story.

How you YOU feel about the United-Continental merger? Are you pleased so far? Or not? 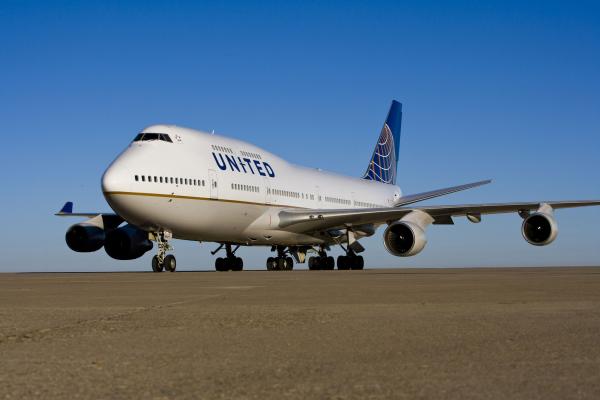 Today United unveiled the largest aircraft in its fleet, the 374-seat Boeing 747-400, in the new United livery.

With the first 747-400 rebranding completed, the carrier now has at least one of each of its mainline fleet types painted in the new United livery.

The company has completed painting 309 mainline and regional aircraft, which is more than 20 percent of its total fleet.

The ongoing visual rebranding of the company will accelerate in the months ahead, and you’ll begin to see rebranded airport facilities and new advertising.

One highly anticipated piece of news was revealed last week: The new United is making its popular, roomier Economy Plus section permanent and will expand it to Continental aircraft starting next year.

Although United won’t be sending that big bird to ATL any time soon, what do you think of the new look overall? Any thoughts about the new United?


WE’D LOVE TO HEAR FROM YOU! What do you think about The TICKET? What’s great or not so great about this issue? What else should we be doing to make it better? Email your comments to us or leave them below. WE LIVE FOR FEEDBACK! So come on! Let us know.


Don’t Forget! BOOK ALL YOUR ONLINE TRAVEL VIA LINKS FROM THE TICKET! It helps us help you!