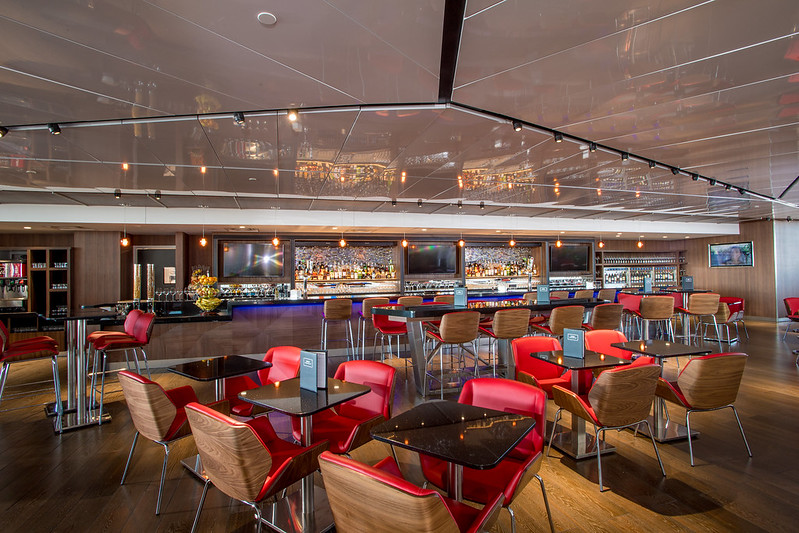 Over the last two years, you’ve likely seen the huge structure being built atop of Concourse B at Hartsfield-Jackson Atlanta International Airport. Now you can take a look inside the posh new lounge via the slideshow provided by Delta above. (Hover over image to start show)

The new 25,000-foot space boasts floor-to-ceiling windows offering panoramic views– and when you are up that high, you can get a nice view of the downtown Atlanta skyline.

Delta’s Andrea Robinson has curated a wine selection that is featured at a unique wine wall where guests can request a taste, glass or a flight of wines. A wine ambassador will help you sample just what they’re looking for. (Sounds a lot like what the American Express Centurion Lounge in San Francisco is doing- see post and photos.)

At the bar, you find the standard variety of premium and complimentary options including cocktails, Sweetwater craft beer and Starbucks coffee, freshly brewed or espresso-based drinks from a Swiss coffee maker. (Similar to what we have seen at Delta’s stellar SFO SkyClub which opened last year– see post and photos here.

It almost feels like you are in the ATL control tower when peering out from Delta’s new SkyClub at Concourse B (Photo: Chris Rank, Rank Studios)

Delta says that the food offerings will include locally inspired soups, salads and breads exclusive to the Atlanta B Delta Sky Club. Additional menu items include pasta and rice salads, corn and blueberry muffins, rye rolls and soup toppings, including crispy chickpeas, coconut shavings and croutons. At breakfast, there are locally baked bagels, hard boiled eggs and a yogurt bar with toppings.  Fruit and snacks are offered throughout the day.

This club is second in size only to New York – JFK’s T4 facility. Located on Concourse B near Gate B18, the new space 500 seats and is expected to be the busiest Club in the entire Delta system. Delta’s two original SkyClubs on Concourse B are now closed.

What’s Next for Delta’s SkyClubs?

What’s your favorite airline lounge? The best Delta SkyClub? Which airline has the BEST clubs overall? Please leave your comments below.

Do you follow us on Twitter? It’s a great way to keep up with the latest news!

Please join the 125,000+ people who read TravelSkills every month! Sign up here for one email-per-day updates!